How Can They Get a Patent On That?—Invalidating Patents

How Can They Get a Patent On That?—Invalidating Patents

“How can they get a patent on that”?  This is a question I’ve heard countless times from clients after receiving a cease and desist letter threatening to sue them for patent infringement.  Patent examination is ex parte, so only the applicant and the examiner are involved.  The examiner is the gate keeper of the system and many of them do push back hard to force applicants to justify an award of a patent.  However, examiners have huge backlogs and will never be as motivated as a competitor to find prior art.  In addition, certain patent validity issues simply cannot be fleshed out in detail in the patent office.  In particular, the patent law requires a patent to “enable” the claimed invention, meaning it has to describe the invention in sufficient detail so someone skilled in the art can make and use it.  Enablement issues are difficult to assess during examination.  They can be pursued in detail in court, however,

As of today, here are your options for trying to invalidate a competitor’s U.S. patent that you believe is invalid:

1.  File a request for an ex parte reexamination;

2.  File a request for an inter partes reexamination; and

3.  Invalidate it in court, either during an infringement suit or by filing a declaratory judgment suit.

Under the America Invents Act, another key option will be available: post-grant review proceedings.

The details of each proceeding are too lengthy to describe in a single blog post.  However, here is a thumbnail sketch of each technique: 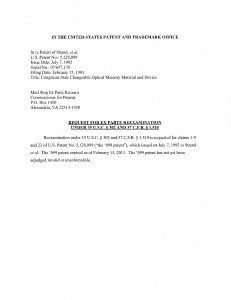 This is the least expensive proceeding and the one where you as the patent challenger have the least amount of control.  You can only challenge the patent based on issued patents, published patent applications, and other

published documents.  Invalidity grounds such as improper inventorship, lack of enablement, indefiniteness, and failure to satisfy the written description requirement cannot be raised.  As the challenger, you file a request for reexamination in which you show that the prior art raises a “substantial new question of patentability.”  If the Patent Office agrees, they reexamine the patent and your involvement ends.  You cannot respond to any of the arguments or amendments made by the patent holder.

This works like ex parte reexamination, except as the challenger you get to respond when the patent holder files responses to office actions.  Under the America Invents Act, this type of re-examination will be replaced with an “inter partes review” proceeding on September 16, 2012.  The standard for initiating an inter partes review will be higher than that for the current inter partes reexamination:  The challenger will have to establish a reasonable likelihood of prevailing on at least one claim, and not merely a “substantial new question of patentability.”  The U.S. Patent & Trademark Office has a nice FAQ page concerning the inter partes review process and other aspects of the America Invents Act at http://www.uspto.gov/aia_implementation/faq.jsp#heading-6.

If you have been sued for patent infringement, you can raise the invalidity of the patent claims as a defense. Here, you are not limited to prior art invalidity based on patents, 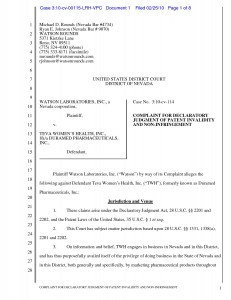 If you have not been sued for patent infringement, the situation is different.  If the patent holder has accused you of patent infringement, you can file a lawsuit to challenge the patent’s validity and/or to show that you do not infringe it.  This type of lawsuit is referred to as a “declaratory judgment” lawsuit because what you are asking the court to do is to declare that the patent is invalid and/or not infringed.  Again, you can pursue the full panoply of grounds for invalidating a patent provided under the law.

Post-grant review proceedings do not go into effect until September 16, 2012.  Once they do, they can only be used during the nine-month window after the patent issues.  Patent challengers can seek to invalidate patents based on all of the same grounds that can be used in court and are not limited to those available in ex parte reexamination or inter partes reexamination (or review).  The hope is that they will provide a more cost-effective way of challenging patents than court proceedings while still allowing all challengers the full spectrum of bases for challenging validity.

Selecting the right proceeding depends on considerations of the evidence that is available to invalidate the patent, cost, timing, and the level of control and involvement that the challenger wants to have in the process.  There are also key “estoppel” provisions in the inter partes reexamination and review proceedings and post-grant review proceedings which should be considered because they can limit your options in court proceedings.