As a follow-up to our original post on the Prometheus case, we did a search to see if there were other patents related to the ones struck down by the U.S. Supreme Court, i.e., U.S. Patent No. 6,355,623 and 6,680,302.  These patents issued in 2002 and 2004, respectively.  In 2006 the same inventors obtained a “related patent”, U.S. Patent No. 6,987,097.  This patent is a continuation of the patents at issue in the Supreme Court case.  The claims of this patent present questions that the Supreme Court did not explicitly address in Prometheus.  The answers to these questions will determine how sweeping the impact of Prometheus will be on medical diagnostic patents.

Recall that the Prometheus opinion articulated the following principles regarding whether something is statutory subject matter:

1.     Laws of nature, natural phenomena, and abstract ideas are not patentable.

2.    An application of a law of nature may be patentable.

3.    In order for an application of a natural law to be patentable, one must do more than simply state the law of nature while adding the words “apply it.”

4.    An application of a natural law is unpatentable if the steps used to apply the natural law involve well-understood, routine, conventional activity previously engaged in by researchers in the field.

The claims of the invalidated patents did not require any affirmative steps to be taken based on the novel “natural law” feature, i.e., the thiopurine concentrations that were discovered to be effective in treating immune-mediated gastrointestinal disorders.   However, the claims of U.S. Patent No. 6,987,097 require affirmative treatment steps. For example, claim 1 reads as follows:

The unanswered question is whether the bolded language would be sufficient to render this claim patentable subject matter.  In contrast to this claim, the claims struck down by the Supreme Court simply recited administering the drug, determining the level of the drug in the patient and the noted the effect without requiring any affirmative treatment steps.  In describing the lack of such an affirmative step, the Supreme Court characterized the relevant portion of the invalidated claims as follows:

[T]he “wherein clauses simply tell a doctor about the relevant natural laws, at most adding a suggestion that he should take those laws into account when treating his patient.  That is to say, these clauses tell the relevant audience about the laws while trusting them to use those laws appropriately where they are relevant to their decision making (rather like Einstein telling linear accelerator operators about his basic law and the trusting them to use it where relevant).

Slip Opinion at 9-1.  The Court further held that the claims “tie up the doctor’s subsequent treatment decision whether that treatment does, or does not, change in light of the inference he has drawn using the correlations.” Slip Opinion at 18. 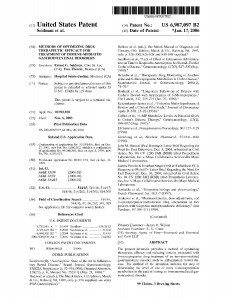 Does the ‘097 Patent impermissibly claim a “law of nature” or permissibly claim an “application of a law of nature”?   The answer depends, in part, on how you analyze the claim.  For example, the “natural law” is the realization that therapeutic benefits occur when the patient’s 6-thioguanine concentration is less than any of the listed concentrations.  So, should the claim be considered as reciting a specific application of a law of nature, i.e., a specific treatment decision made based on the law of nature?  Or, should it be considered as merely using a law of nature in a conventional way, by reducing a patient’s drug dosage when the blood concentration reaches a predetermined lower limit?

Prometheus does not address this question directly, and there is language in the opinion that supports both sides of the issue.  In my view, this is a statutory method claim, the patentability of which should depend on whether the claim is actually novel and non-obvious.  However, in view of Prometheus you can expect patent practitioners to draft their claims so that any such “natural law” is embodied in an affirmative treatment step.  Whether that will suffice, will initially be up to the Patent Office and the manner in which it interprets and applies the Prometheus opinion.  Eventually, it will be up to the courts.  In the meantime, companies will be forced to guess whether it is worth investing in such patents given the cloud of uncertainty created by Prometheus.