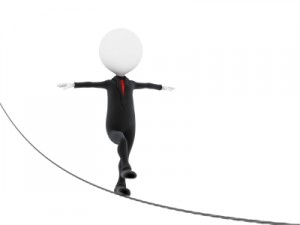 Quite apart from the scientific and technical issues involved, the patent law itself is quite complex.  The variety of legal requirements in order to obtain a valid patent provides a rich palette of possible defenses in a patent case.  Patent claims can be invalidated for lack of novelty, obviousness, indefiniteness, lack of enablement, and failure to meet the written description requirement.   Patents can be held unenforceable for inequitable conduct, such as when material prior art is intentionally withheld from the examiner.

In addition, in many patent cases (and most I’ve been involved with), the asserted patent’s embodiments do not describe the defendant’s accused product. Instead, the plaintiff argues that the claims broadly encompass the accused product, even though the specification does not specifically describe it.   In this situation, the panoply of defenses often produces a tension in the patent holder’s infringement and validity arguments which defendants can, and should, exploit.  Here are some strategies for doing this.

1.  Flesh Out the Patent Holder’s Infringement and Prior Art Validity Positions

There is an old maxim that patent claims may not be treated as a “nose of wax” and interpreted one way for purposes of establishing infringement and another way for avoiding the prior art.  Many jurisdictions (e.g., E.D. Texas, N.D. California, N.D. Illinois) have adopted “patent local rules” which require and systematize the disclosure of a patent holder’s infringement contentions and a defendant’s invalidity contentions.  However, not all jurisdictions have patent local rules.  Four jurisdictions that I have practiced in–the District of Delaware, the District of Connecticut, the Central District of California, and the Eastern District of Michigan–do not.

Second, serve validity contention interrogatories that seek an explanation of how the Plaintiff is reading the claims to distinguish the prior art.  Note that jurisdictions with patent local rules often require a patent holder to disclose infringement contentions, but they typically do not require the patent holder to disclose validity contentions, i.e., the reasons that they contend the claims are valid over the prior art asserted by the defendant.  Therefore, defendants must often serve contention interrogatories to flesh out the patent holder’s validity positions.

Some defendants serve very broad contention interrogatories that seek to force the patent holder to explain why the patent claims are valid over every piece of prior art in the case.  These will likely be objected to as overbroad, and it could be difficult to convince the court to compel a response.  Thus, it may be necessary to tailor the interrogatories to the key pieces of prior art.

Defendants should make use of requests for admission to zero in on the specific areas of dispute concerning whether the claims read on the prior art.  In addition, even when infringement contentions are court ordered, patent holders often respond to them in a loose and qualified manner so they can present arguments that are ultimately inconsistent, even if not manifestly so. Requests for admission can help force the patent holder’s hand.  In particular, such requests should seek admissions that the accused product lacks certain claim elements.  To get meaningful responses, you may have to avoid using the claim language itself and get seek more focused admissions based on the way that you are proposing to construe the claims.  You can also seek admissions that link the claim elements to particular features in the specification for use in claim construction proceedings.

If possible, the goal is to show that the patent holder’s positions on infringement and invalidity cannot be reconciled.  Of course, it is highly unlikely that you will get any sort of express admission on this point.  Instead, what you can do is build a record that reveals how the positions cannot be reconciled.  That record can then be used in summary judgment proceedings and at trial.

2.  Compare the Patent Holder’s Positions to the Written Description

Forcing the patent holder to commit to its infringement and invalidity positions will also reveal whether it is interpreting or applying its claims in a way that cannot be reconciled with the asserted patent’s written description.  Under U.S. patent law, claims can be invalidated if one skilled in the art would not have recognized that the patent holder was in possession of the claimed subject matter at the time the application was filed.

3.  Look for Areas of Indefiniteness

Patent claims must reasonably apprise skilled artisans of the metes and bounds of the invention in order to be valid.  This is the requirement of claim definiteness.  Is the patent holder applying the claims in a manner that renders them indefinite?

The patent holder’s expert report may provide ammunition here.  Is the expert using a methodology to determine infringement that could not be derived from the patent in suit?  If so, why?  Push the expert on the issue during deposition.  It may reveal that the expert had difficulty in determining how to apply the claims. If the expert’s infringement evaluation methodology was not revealed in the patent, you may be able to argue that the patent claims are indefinite because one skilled in the art cannot tell how to evaluate infringement or invalidity from the text of the patent.  In some cases, there may be little room for disagreement among skilled artisans as to the type of tests or test results that would be used to evaluate infringement.  However, that will not always be the case.  There may be conflicting test procedures in the literature, none of which are identified in the patent. If so, you may have the basis for an indefiniteness attack.

The rich panoply of patent defenses makes defending patent cases interesting and challenging.  However, a patent case can often resemble a game of “whack a mole” if the patent holder is not pinned down on its contentions.  The foregoing strategies should help force patent holders to commit to its positions and clarify your strongest defenses.