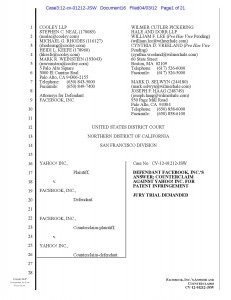 On April 3 Facebook answered Yahoo’s patent infringement complaint in the pending lawsuit in the Northern District of California.  As many people predicted, Facebook also alleged patent infringement claims against Yahoo based on 10 of Facebook’s patents.  We discussed Yahoo’s patents and the likelihood that statutory subject matter issues would play a prominent role in Facebook’s defense in a previous post.

Some of Facebook’s patents suggest that both parties have claims that may read on the same features.  For example, as discussed in our previous post, Yahoo asserted that it’s “customization patents” cover Facebook’s News Feed.  The News Feed feature presents items of interest to the user based on the user’s preferences and interest.  However, on November 2, 2010 Facebook received U.S. Patent No. 7,827,208 for “Generating a Feed of Stories Personalized for Members of a Social Network.”  Neither of the Yahoo “customization patents” (U.S. Patent Nos. 7,454,909 or 5,983,227) were considered by the Patent Office in during the prosecution of Facebook’s U.S. Patent No. 7,827,208, despite their having earlier application filing dates.  Thus, it will be interesting to see if Yahoo can use its customization patents to invalidate the Facebook patents. 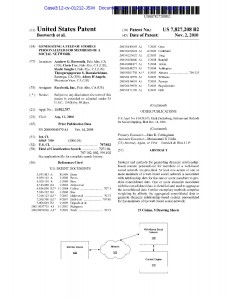 More and more companies involved in patent litigation appear to be embracing the concept of “mutually assured destruction” or the “MAD doctrine” made famous by Robert McNamara during the Kennedy Administration by asserting their own patents in response to accusations of patent infringement.  Of course, this strategy is only available against a plaintiff that has commercialized products or services.  In the case of “patent trolls” or “non-practicing entities” (NPE) this strategy is not available because the NPE is not doing anything that could be construed as an act of patent infringement.

In any event, the stakes are now much higher for Yahoo as Facebook has alleged that a good deal of Yahoo’s business is predicated on the infringement of Facebook’s patents.  Like Yahoo, Facebook is also seeking injunctive relief.  The increased stakes may prompt the parties to settle early, at least after beating up on each other by going a few rounds in the discovery process.