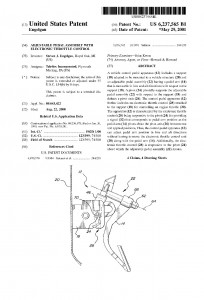 In KSR v. Teleflex, the Supreme Court described numerous reasons for combining or modifying prior art references in an obviousness analysis.   The Court also made clear that these reasons need not be explicitly set forth in the prior art references themselves.  In particular, the Court stated that “As our precedents make clear, however, the [obviousness] analysis need not seek out precise teachings directed to the specific subject matter of the challenged claim, for a court can take account of the inferences and creative steps that a person of ordinary skill in the art would employ.”  KSR International Co. v. Teleflex, Inc., 550 U.S. 398, 418 127 S.Ct. 1727, 1741 (2007).

If you are seeking to invalidate a patent, there is one important place to look for evidence to support combining or modifying references: the text of the patent you are seeking to invalidate.  In particular, the Background section often describes the known challenges that the inventors were seeking to address.  These known challenges are exactly the types of incentives that would have motivated combining and modifying prior art references.

The patent-in-suit in KSR (U.S. Patent No. 6,237,565) includes similar statements: “When a vehicle control pedal assembly includes both an adjustment apparatus and an electronic throttle control, the pedal assembly can be complex with a great number of parts. These control pedal assemblies can be expensive, time consuming to assemble, and require a significant amount of packaging space.”  U.S. Patent No. 6,237,565 at 1:48-53.  This suggests that several known design incentives existed at the time the patent was applied for: 1) reducing the complexity and number of parts of pedal assemblies, 2) reducing assembly time, and 3) reducing packaging space.

You may be inclined to protest that these statements are not admissions concerning the scope of the prior art, but rather, reflect observations made by the inventors themselves.  Maybe, maybe not.  The Manual of Patent Examining Procedure (“MPEP”) describes the content of the “Background of the Invention” as follows:

The Background of the Invention ordinarily comprises two parts:

(1) Field of the Invention: A statement of the field of art to which the invention pertains. This statement may include a paraphrasing of the applicable U.S. patent classification definitions. The statement should be directed to the subject matter of the claimed invention.

MPEP, Section 608.01(c) (emphasis added).  If a Background section is carefully drafted, it is not a foregone conclusion that statements included therein would be deemed “admissions” concerning the state of the art. However, you can still ask the inventors or possibly even the patent attorney deposition questions to establish whether the statements made in the Background section reflect knowledge in the prior art the time the application was file.  You can also use the statements to craft requests for admission concerning the state of the art at the time the application was filed.

If the patent-in-suit has foreign counterpart applications, it can be especially important to review them.  Foreign patent offices often require explicit statements about the state of the prior art or even admissions that specific documents are in fact prior art.  The European Patent Office requires that applicants specifically identify the closest prior art in their applications.  These references also may contain statements that reflect the problems that artisans in the field were trying to solve at the time the application for the patent of interest was filed.

As with many litigation lessons, there are some important prosecution lessons here.  Be careful about what you say in the Background section of a patent application.  It may be that the inventor discovered the problems and design incentives that the patent is intended to address.  Take care not to suggest otherwise by referring to those problems and design incentives in the Background section in a way that suggests they were known in the art if in fact they were not.  Patent prosecutors may feel inclined to “sell” an invention by describing the problems it is intended to solve in great detail.  However, you may want to distinguish between those problems known to the inventor and those known in the prior art so that litigators cannot attempt to characterize the statements as admissions regarding the state of the prior art.