Correcting the Stated Inventorship on a U.S. Patent or Application

Correcting the Stated Inventorship on a U.S. Patent or Application 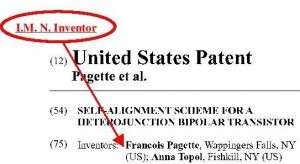 The law of inventorship is not too difficult to state but can be very difficult to apply in practice.  In general, only those individuals who contributed to the conception of the claimed invention in a patent should be named as inventors.  However, this often raises questions about what the nature of the “contribution” should be.  Moreover, in some organizations, being named as an inventor brings prestige and/or financial rewards.  Thus, the issue of naming inventors can become politicized.

One of the problems that I’ve seen, especially with those new to the patent system, is that an inventor will want to reward a financial backer or some other person who assisted with the development or commercialization of an invention by naming them as an inventor.  Do not do this.   There are at least two key problems with naming the wrong inventive entity on a patent application: 1) all named inventors presumptively own a pro rata share of the patent application and any patents issuing therefrom unless they have assigned their rights to another, and 2) patents can be invalidated in court for failing to name the proper inventors.

With this backdrop, the question is often asked “How do I add or delete an inventor from my patent application”?  There are three different variables that affect the available options:

1)      The nature of the inventorship error (misjoinder or nonjoinder)

2)      Whether the patent application is pending or has issued

3)      Whether the correction is uncontested

Uncontested inventorship corrections for issued patents can be handled by submitting a petition and fee to the U.S. Patent and Trademark Office.  All of the inventors (or assignees of their interests) must agree to the correction.  As to all non-joined inventors seeking to be added, they must state that he inventorship error occurred “without any deceptive intention” on their part.  In the case of misjoinder, the inventor(s) being deleted need not submit such a statement.  However, in case of misjoinder or nonjoinder, the currently named inventors must submit a statement that they do not disagree with the change.  Any assignees of the non-joined or current inventors must also submit a statement agreeing to the change.

Uncontested inventorship corrections may also be made by a U.S. district court.  The most likely scenario giving rise to this type of correction is when the validity of a patent is challenged in an infringement case because the patent fails to state the correct inventors.  In that case, the court can issue an order that the patent be corrected if the inventors and assignees have had a chance to be heard.  However, such court orders are not self-effectuating.  In order to complete the correction process, you must submit a copy of the court order and a Certificate of Correction to the Patent Office.  Otherwise, the Patent Office will continue to treat the uncorrected inventive entity as if it were correct.

The U.S. district courts can also resolve contested inventorship disputes via a “Section 256 action,” which is named after 35 U.S.C. § 256, the statutory provision that gives rise to their authority to resolve them.  However, the district courts cannot correct the inventorship of pending patent applications.  Only the U.S. Patent & Trademark Office can do that.

Uncontested inventorship corrections can be made to pending patent applications by filing a request with the Patent Office that sets forth the requested change.  In the case of pending applications, each person being added or deleted must sign a statement that the inventorship error arose without deceptive intention on his part.  Note that this particular requirement differs from the requirements for correcting issued patents.  In the case of issued patents, only those inventors being added must state that the error arose without deceptive intention on their part.  An oath or declaration by the correct inventors must also be submitted along with a fee.  If any of the original named inventors assigned their interest, the assignee must also provide written consent.

For example, one individual may believe that he was wrongly omitted from a patent application or that others derived an invention claimed in a patent application from him without naming him as the inventor.  One way to handle this scenario is for the omitted inventor to file a second application with the same disclosure and claims as the application from which he was omitted and then request that the Patent Office declare an interference between the two applications.  An interference proceeding is a Patent Office proceeding that is typically used to resolve priority contests, i.e., to determine who was the first to invent something as between competing inventors.  However, interferences can also be used to resolve contested inventorship disputes if there are competing, pending applications that claim the same subject matter.  One word of caution:  In order to submit claims that are identical to those of an earlier application, the claims must be submitted no later than one year after the earlier patent application was published (assuming the copied claims were published with it), or in the case of unpublished applications, within one year of the earlier application’s issuance as a patent.