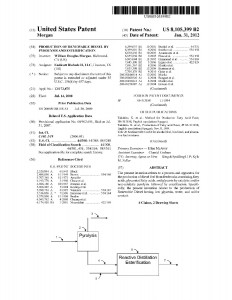 US Pat. 8,105,399 for Production of Renewable Diesel by Pyrolysis and Esterification

Renewable energy technologies such as those that use biomass, solar energy, wind energy, etc. are of great interest due to the volatility of the oil market and concerns about the country’s dependence on foreign sources of oil.  In this post, we look at some key considerations in determining how to protect these technologies.  A recent example of a renewable energy patent is U.S. Patent No. 8,105,399, which issued on January 31, 2012 to Endicott Biofuels II.

Renewable energy technologies can often be protected through trade secret law or through patent law.   The two mechanisms tend to be mutually exclusive.  To obtain a patent, you must disclose how to make and use the invention so that someone skilled in the art can do so.  To maintain trade secret protection, you must take steps that are reasonable under the circumstances to maintain the secrecy of the technology.  Generally, this involves restricting access to information to those with a need to know it and taking appropriate steps to prevent the unauthorized use and dissemination of the information by those who do have access to it.  The problem is that once the information is disclosed and no longer “secret,” you cannot put it back in the box, even if it was disclosed through the unlawful conduct of another.  Trade secret protection can be perpetual as long as it stays secret.  In contrast, patents remain in force for a limited time: twenty years after their application filing date.

1.  Is it possible to reverse engineer the technology based on information that is available to competitors?

2.  How difficult will it be to keep the information secret?

3.  How difficult will it be to determine if someone is making unauthorized use of the technology?

As a general rule, technologies that are difficult to reverse engineer and which are not difficult to keep secret are good candidates for trade secrets.  Conversely, it is usually difficult to detect unauthorized use of them.

Nevertheless, energy generating plants tend to be large and difficult to operate in secret.  They also tend to have a large number of employees operating them and/or contractors, vendors, etc. who have access to them.  It may not be feasible to keep a new process secret, even if employees are instructed to do so.  If the information is likely to become publicly known, or at least known to your competitors, your best option may be to seek patent protection.

Here are some strategies for protecting renewable energy technologies with patents:

2.  Keep in mind that you need to describe manipulative steps to obtain a process patent.  Scientists and engineers are sometimes under the impression that they can patent their discoveries of particular process variable relationships or properties that were previously unknown.  That is not the case.  In order to patent a process, you need to describe a sequence of steps that someone would actually carry out.  For example, you can describe how the variables will be adjusted, the sequence of adjustment, and the process conditions or events that will prompt such adjustments.

3.  Consider what form the process data will be expected to take and describe it in the patent application.  In other words, ask your engineers how they would determine if infringement is occurring by reviewing a competitor’s process data (e.g., by doing a data dump of their process computing and control system).  In the application, describe the embodiments in the same way you would describe what the infringer is doing. This will make it easier to enforce the patent against infringers.

4.  This is a corollary to point 3: Avoid claiming the process in a manner that relies on knowledge of properties that are not readily observable.  Especially in the case of processes, scientists and engineers may focus on “first principles” and the mechanism by which the process operates.  For example, in a process that involves a chemical reaction, they may focus on the reaction mechanism and the sequences of reactive intermediates that are generated.  However, if the process is described and claimed in this manner, it may be difficult to prove infringement.  Instead, you want to base your protection on the observable and verifiable process data that an infringer is likely to track.  These things tend to be feed composition data, pressures, temperatures, flow rates, and catalyst properties (in the case of chemical reaction processes).

With the amount of activity in renewable energy, it is important to make sure that your technology is adequately protected.   These strategies should help you focus your protection efforts.