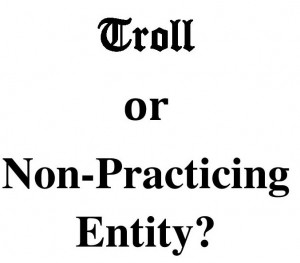 U.S. Patent Practice and the Proliferation of NPEs

The emergence of so-called “patent trolls” or their less pejorative name “non-practicing entities” (NPEs) has been a controversial topic for some time now.  Those who become frequent target of NPE lawsuits are understandably hostile to NPEs or anything that increases their litigation defense costs and disrupts their business.  Conversely, however, some argue that NPEs are merely reflective of the value of a U.S. patent as an asset.  The fact that patents can be freely traded and owned by those who do not practice them increases their value and encourages more to invent, some might argue.  The purpose of this post is not to take a position on whether NPE suits are “good” or “bad” or to express any view on them, but rather, to explain how certain features of the U.S. patent examination and issuance process may contribute to their proliferation.

NPE lawsuits do not seem to be prevalent abroad.  One commentator notes that “Whereas patent trolls seem to abound in the United States, the European patent troll appears scarcer than hen’s teeth.”  Gottfried Schüll, Intellectual Asset Management (September/October 2009) at 95.  There are many features of the U.S. patent and judicial systems that may explain this difference, such as jury trials, contingency fees, large damages awards, extensive discovery, the lack of compulsory licensing, the absence of a requirement to “work” a patent to keep it in force, etc.

However, I believe that there are key differences in the processes of granting patents that allow NPEs to obtain U.S. patents that are better tailored to their business model of licensing and litigating than the patents they could obtain for the same invention elsewhere.  These differences are: 1) continuation application practice, and 2) the written description requirement.  They may account, at least in part, for the amount of NPE litigation in the U.S. relative to other countries.

NPEs typically have no income other than what is generated through patent licensing and litigation.  Thus, unless they have large financial backers, they must rely on contingency fee arrangements with patent litigation counsel.  The most attractive patents from the NPE’s perspective are typically those that can be asserted against entire industries or large numbers of defendants.  They generally allow the NPEs to pursue quick and easy settlements from those lacking the resources or wherewithal to fight (the “low-hanging fruit”) and to leverage the proceeds from such settlements to litigate against bigger players.

Patents that are more likely to cover entire industries or other large groups of defendants are easier to obtain in the U.S. and abroad because of some of the unique features of our patent system.  Examples abound, with one of the most famous examples being the Lemelson patents that were directed to bar code technology.

More than perhaps any other country, the U.S. allows inventors to alter the scope of their protection for an invention over time and to dynamically craft their patent claims as the marketplace evolves.  In particular, the U.S. continuation practice and written description requirement work together to make this possible.  These features incentivize U.S. applicants to continually monitor the marketplace and file continuation applications or amended claims, especially once they observe product features that have become ubiquitous and which can be ensnared by artfully drafted.

Thus, five or ten years after an initial application is filed, an inventor can still file a U.S. continuation application with a different claim scope as long as the claims are “supported” by the original specification.  This gives applicants a great advantage in that they can watch how the marketplace evolves after their patent applications were filed and then tailor their claims to cover after arising technologies that they never specifically conceived of.

Claims in U.S. continuation applications must be supported by the specification of the earlier application(s) on which they are based.  The issue of whether claims are “supported” by the original specification brings us to the written description requirement, which works together with continuation practice to increase the ease of obtaining the types of patents most suitable for NPEs.

In my experience, and as reflected by the differences in European and U.S. patent law, U.S. patent applicants have much greater liberty to reshape the scope of their claims over time.  Given the same specification, European law tends to be much more restrictive in assessing whether a new set of patent claims is “supported” by the original specification than is U.S. law.

Here is the key difference:  In the U.S., an applicant can broaden its claims in a continuation application by deleting claim features far more readily than in Europe.  An applicant can also generally submit new claims that are drafted as broadly as the prior art will allow as long as the claims do not recite a feature not found in the specification.  European practice is not this liberal; nor is the practice in other jurisdictions such as Japan and China.

When a patent applicant submits new or amended claims in Europe, whether during the prosecution of an original application or in a divisional application based on it, the European examiners will consider whether the claims omit anything that is deemed to be “essential” to the invention.  That is not the case in the U.S.  Unless the U.S. application expressly says that a feature is “critical” or “necessary,” chances are the applicant can freely omit it from new or amended claims.

In contrast, the European practice is to look beyond the applicant’s characterizations of features. The patent examiners make their own determinations as to whether a feature is “essential” based on their understanding of the technology.  To broaden a new or amended claim relative to an embodiment in the specification, an applicant must satisfy all three of the following tests by showing that a skilled person would “directly and unambiguously recognize” that:

(iii)             The replacement or removal requires no real modification of other features to compensate for the change.

These last two features are not required by U.S. law.  U.S. patent examiners will not independently review the specification and make their own determination of what features are “indispensible”.  Generally speaking, features from the embodiments can be excluded from U.S. patent claims as long as the specification does not describe them as “essential” or “critical.”  As a result, many U.S. patent attorneys are careful not to describe features in this manner in their patent applications.

Skilled U.S. patent attorneys wordsmith patent claims so that they conform to an embodiment in a patent application while at the same time encompassing much more than that embodiment.  The flexibility provided by U.S. continuation practice and the U.S. written description requirement allows them to do this and to thereby capture a much larger class of after-arising technologies than would be possible in Europe or other jurisdictions.  As a result, an applicant with the same patent specification filed in Europe and the U.S. can often achieve patent protection of a much larger scope in the U.S., making it easier to obtain patents tailored to the NPE business model.

Which System is “Right”?

The fact that the U.S. system lends itself to producing more patents suitable for the NPE business model is a consequence of U.S. policy priorities.  The U.S. system provides an inventor with greater rewards–by increasing the potential scope of patent protection–than does the European system or others like it.  The quid pro quo for patent protection is teaching the invention to the world.  Some might argue that the U.S. system better incentivizes innovators to make such contributions by better compensating them for making them.

The European system arguably provides for more predictability and stability by reducing the likelihood that a patent applicant will obtain patent claims that ensnare products which are far afield from its specification.  The time limits on filing divisional applications reduce the potentially disruptive threat of a patent application by ensuring that at some point an applicant can no longer pursue claims of a different and potentially problematic scope.

Each system places some weight on rewarding innovation and providing predictability to the marketplace, but the weights are different.  The system that you think is “right” will depend on the relative weights that you place on those goals.  However, the U.S. system appears to produce more NPEs and more NPE litigation. If the U.S. wants to reduce NPE litigation, it may want to look to the patent practices of other countries.