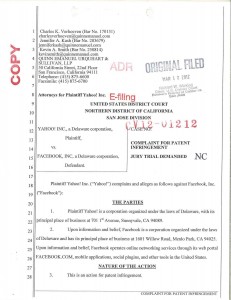 The patent infringement lawsuit filed by Yahoo on Monday has caused quite a stir.  Not only has the timing of the suit raised eyebrows because of Facebook’s impending IPO, but so has the subject matter of the patents-in-suit.  A closer look at Yahoo’s patents reveals that the validity of many of their claims may turn on the application of the still murky and evolving law of “statutory subject matter.” The question of “statutory subject matter” concerns whether an invention is the type of thing that can be patented, regardless of how new or innovative it is.  Historically, abstract ideas and laws of nature have been unpatentable.

All of the Yahoo claims were allowed by the U.S. Patent & Trademark Office before the U.S. Supreme Court addressed the proper test for determining whether patent claims constitute statutory subject matter in Bilski v. Kappos.  Thus, the basis on which at least some of the claims were granted may no longer apply, providing fertile ground for Facebook to attack the claims as invalid.

Yahoo filed suit in the Northern District of California on March 12, 2012, alleging that Facebook infringes ten (10) patents.  For a copy of the Complaint, click here.  The Complaint reveals that Yahoo was acutely sensitive to the high profile the suit would receive. Numerous allegations were pled which are intended to portray Yahoo as an innovator in website technology.  Many patent infringement complaints are vanilla pleadings that do not include such statements, but Yahoo likely expected (and hoped) that the Complaint would be extensively quoted in the press.  Although the Complaint says that “The Patents-in-Suit are a reflection of Yahoo’s research and development achievements,” several of the patents were developed by Overture Services, Inc., a company that Yahoo acquired in 2003.  Yahoo also goes to great lengths to paint Facebook as a non-innovative free-rider and repeatedly requests that the court enjoin Facebook from using the patented technologies, asserting that damages are “inadequate” to compensate it.

The Yahoo Patents are broken down into four categories in Yahoo’s Complaint: 1) advertising patents, 2) privacy patents, 3) customization patents, 4) social networking patents, and 5) a messaging patent.  Already in the blogosphere there has been groaning that these technologies are widely known.  However, in Yahoo’s defense, several of the patents have priority filing dates going back to the 1997-2000 time frame, so query whether  the claimed inventions were “new” before then.

At a high level, the Yahoo patents are directed to business methods typically implemented on computer networks and over the Internet.  Many of them involve techniques for determining what information interests a particular user and then selectively displaying advertisements or targeting other information to the user based on the user’s interests.  Of course, in actual use the patented methods are implemented by specific software.

It can be somewhat difficult to find prior art that covers such business methods because often times the best prior art is not found in patents or published literature, but rather, in commercial systems that may have existed at one time.   For this reason, and because of the nature of Yahoo’s patent claims, the issue of statutory subject matter will likely become important in this case.

So what kinds of things can you patent?  Unfortunately, the Supreme Court’s Bilski decision did little to clarify the issue, and subsequent cases from the district courts and the Federal Circuit Court of Appeals (which hears all patent appeals) have been all over the place.  For instance, in Bilski, the Supreme Court said that each of the following is true:

1.  Business methods may be patentable (i.e., they are not per se unpatentable).

2.  Abstract ideas are not patentable.

3.  Whether patent claims recite a “machine” or some “transformation of matter” is not the sole test for whether subject matter may be patentable (the Federal Circuit said that it was the sole test in its earlier decision in the Bilski case).

4.  Simply applying an abstract idea to a particular technological environment or performing” insignificant post solution activity” on the results of an abstract idea cannot render the idea patentable.

5.  An application of a law of nature or mathematical formula to a known structure or process may be patentable.

Are we all clear?

The Statutory Subject Matter Issues Raised by the Yahoo Patents

During the time frame that the Yahoo patents were being prosecuted, the U.S. Patent and Trademark Office had a policy of allowing software patents if and only if the patent claims were limited to the use of particular machines (e.g., computers) or transformations of matter (e.g., altering a chemical process based on the software).

Several of the Yahoo patent claims were initially rejected by the U.S. Patent and Trademark Office because they were not limited to computer implementations.  For example, U.S. Patent No. 7,100,111 includes several claims that were ultimately amended to require computer displays and computer networks in order to be allowable.  One of the claims in U.S. Patent No. 7,406,501 was only allowed after Yahoo added the phrase “hardware components” to it (claim 33).  Other claims were not challenged, but presumably that was because the Patent Office felt that they had sufficient computer limitations to render them patentable.

While Yahoo’s claims may have ultimately survived Patent Office scrutiny in the pre-Bilski era, it is not clear whether they would survive judicial scrutiny now.  The case law is simply not clear.  In the case of Cybersource Corp. v. Retail Decisions, Inc. last year, the Federal Circuit Court of Appeals struck down a patent directed to a method of detecting credit card fraud over the Internet, even though the patent claims were limited to computerized implementations.  Conversely, a different panel of the Federal Circuit upheld patent claims directed to a method of monetizing and distributing copyrighted works over the Internet in Ultramercial v. Hulu.  The Cybersource panel held that the detection of credit card fraud over the Internet was merely an “abstract idea” while the Ultramercial panel held that the claims at issue in that case were a “practical application” of an abstract idea, and therefore, were the type of subject matter eligible for patent protection.  One could fairly surmise that the difference in outcomes was attributable to the different judges that decided each case.

Time will tell how the Yahoo suit will play out.  Perhaps Facebook will want to protect its IPO by agreeing to an early resolution of the case.  However, if the case is pursued, statutory subject matter issues may play a key role.  Given the nature of the case law, the manner in which each party characterizes the patent claims as either an “abstract idea” or a “concrete application” of an idea will likely be critical.  Who knows, perhaps the courts will finally clarify the law.